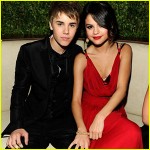 The other day, Justin Bieber and Selena Gomez had a really awkward moment on the “kiss cam” and everyone went ‘naners about what it meant to the relationship.

That’s the nature of a super-celebrity relationship. It’s happening right now with Will Smith and his wife Jada. Rumors of an impending divorce has sportsbooks jumping at the opportunity to make a little extra cash. Bovada had a prop bet last week whether the couple would get a divorce by the end of the year.

Everyone wants a crack at decoding the relationship between two megastars. So its no surprise I found a Celebrity Prop Bet on Bovada wagering whether Bieber and Gomez would tie the knot in 2012. Bieber is 18 and Gomez is 19 so it wouldn’t be completely out of the question that the couple of over a year would be planning it.

In fact, the Chicago Sun-Times just ran a report that the couple was recently looking for engagement rings.

“Several people close to the superstar couple say they’re convinced an engagement is in the very near future,” the report said. “The teen idols were spied closely eyeing some pricey bling in a couple of major jewellery stores — especially major diamond baubles that could only be described as the kind usually slipped on a woman’s left-hand ring finger.”

But when US Weekly asked the Bieber camp for some juice, rep Scooter Braun was quick to deny everything.

himself was “laughing” about it.

Still, the couple has 5/1 odds on Bovada to get engaged by the end of the calender year.

Sportsbooks tend to know what they’re talking about and those sound like pretty good odds for it to happen. Or really bad odds if you’re Bieber.